So, as I mentioned earlier, my nose was deep in New York magazine today. And when I say nose, I mean it.

This morning, pre-magazine lunch break, I was thinking about my Day 9 post and about the various mediums at my disposal. Still photos. Video, if I get less self-conscious about it. The written word. Expressing my thoughts through music.

But what about smell? Aren’t smells some of the most evocative in terms of nostalgia, in terms of memories?

Because we’re here among friends, and I don’t have a background in biochemistry, I’m going to tell you the best idea I have in terms of a future invention: a smell capturer. (copyrighted, as of right now!) I envision it looking a bit like a Flip cam or something, where you could stick it out and capture a smell – churros frying late at night, the smell of their accompanying chocolate mixing in (with a splash of drunkenness, just to capture the entire experience of waiting in line). That untouchable smell of chic in high end boutiques. The smell in the spines of old books. Hell, libraries in general would work for me. Would smells not be some of the best memories to bring home, from places near and far?

And we’re not talking those cloying, fakey fruity smells that come out of candles. This is the actual smell of fresh cut grass, the smell of electricity and earth before a thunderstorm. I have a feeling this library candle might not soothe me the same way a walk in the stacks does, because it wouldn’t smell quite right: 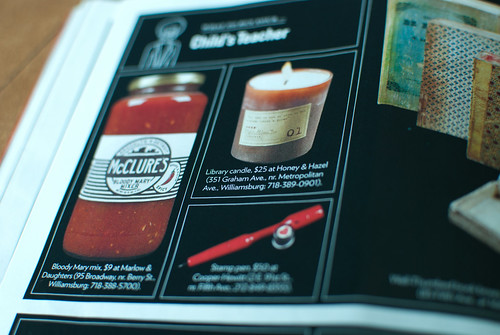 Just in case there are any lingering doubts about the power of smells, and to get back to that New York magazine, today I was looking at this page: 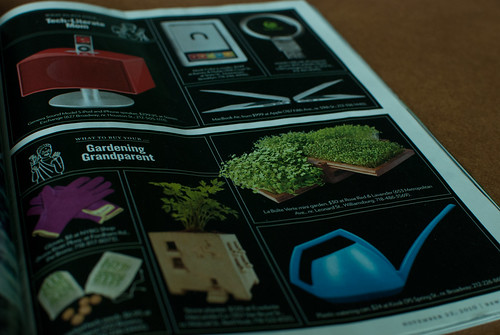 and found that all of a sudden, I was thinking of my friend Anna. She just popped into my head. And of course, she has nothing to do with “What to Buy Your Gardening Grandparent.”

Well, then I saw this ad on the facing page, which I swear I had not looked at up to this point: 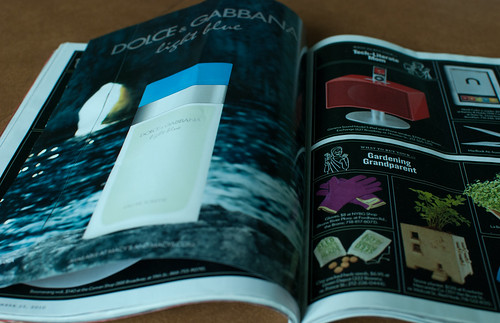 Light Blue is the perfume she wears, but just some of the time. But ironically, it’s also what I often wear. And when I smelled it, I didn’t think, “There’s my perfume,” or “Light Blue.” I thought of my dear Swedish friend, now living in Barcelona, and getting ready to go out when I was visiting her in Pamplona. One specific night of trying on clothes and shoes and listening to Fito y Fitipaldis and pre-gaming in her apartment, where we had to be kind of quiet and keep the door closed because we didn’t want to disrupt her roommates. I have photos from this specific night.

much later that night (and the elusive author shows her face!)

But the smell brought me there, to that very room on the outskirts of town, to a moment I wouldn’t have even thought about photographing. And there was something kind of wonderful about it all. An entire creative walk down memory lane, all brought on by a perfume strip in a six month old magazine.

So now the obvious question: if you had one of my magic smell capturers, what would you capture?