At long last, the first of a few posts from my Seattle adventures.

After wandering Pike Place Market and a few other downtown spots on Saturday morning, my friends and I decided to check out the library – Montana friends had recently visited and piqued my curiosity, and my friend had a somewhat overdue book to return. For me, the Seattle Public Library was a bit like the Kindle: useful, probably more in touch with the modern world than its old school analog counterpart, something I was initially against but would probably come around to (and, given time, maybe even learn to accept as normal). It felt sort of cold – all metal and steel and straight lines, no old wooden tables or chairs to sink into. But then again, floppy chairs encourage sleeping loiterers, and wooden tables are heavy and expensive. In some ways, it reminded me of a church – but a church devoted to Life 2.0 more than to traditional learning. It was a space that made me think – and perhaps that’s the point of libraries, even more than feeling cozy and welcoming, with that smell of books and paper and binding glue. I guess it’s something to consider.

Pritzker Prize winning architect Rem Koolhaas was behind the design, an angular building with an interior floor plan that moves in a circle, like a one-way parking garage. The bookshelves are built at a slight angle to correct the tilt of the floor, though the most common way to get from one floor to another is via escalator, which travels through a sci-fi tunnel, lit with a chartreuse only a modern art museum could love. The focus is on computers more than books – or at least that was my impression – vast banks of computers for patron use, other tables and sectionals with outlets built into the desks or the floor. Perhaps because the books are shelved together, all scrunched in, while the open spaces seem made for this building – it really can be labeled “soaring” – something hard to pull off in a city known for its gray skies. 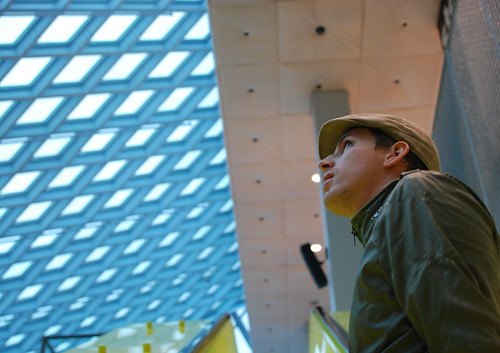 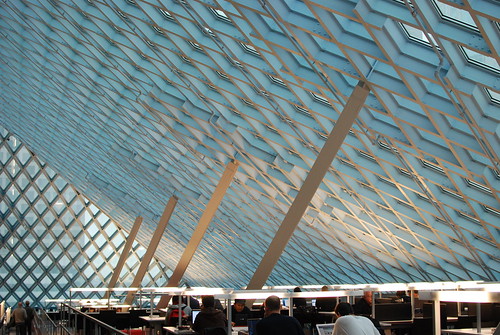 I was also really smitten with the floor in the lobby, carved with thousands of words in who knows how many languages. Since I never found a language I understood, I actually have no idea what they say. But I love words, particularly in silver and in wood. 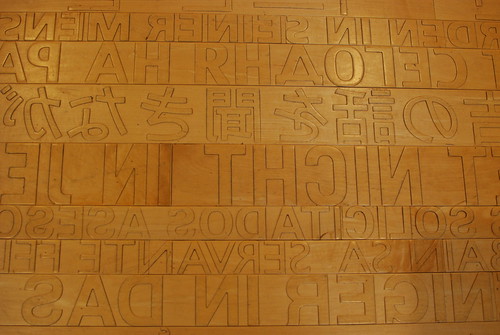 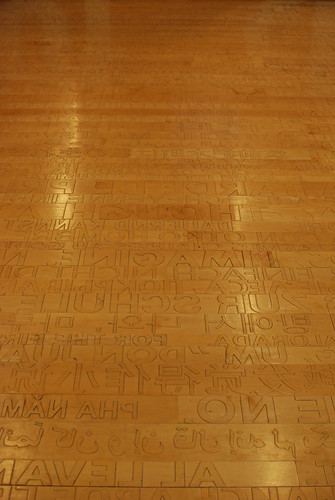 Perhaps one of the coolest things about the building, completed in 2004, is that it represents a commitment to learning on the part of the citizens of Seattle. From the library website, “In 1998 Seattle voters said ‘yes’ to the largest and most comprehensive library initiative in our country’s history, launching a $290.7 million project to rebuild and renew The Seattle Public Library. Ten years later, ‘Libraries for All’ is finished – with four new libraries in communities without library service, the replacement, expansion or renovation of 22 existing branches, and a spectacular new Central Library.” 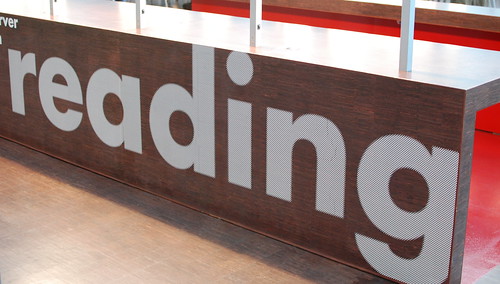 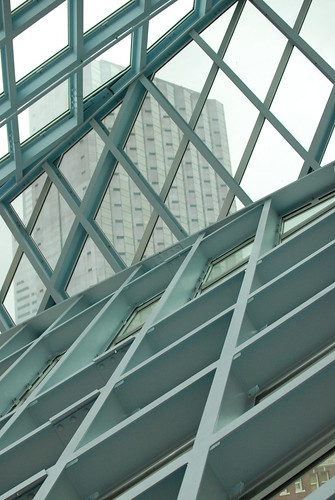 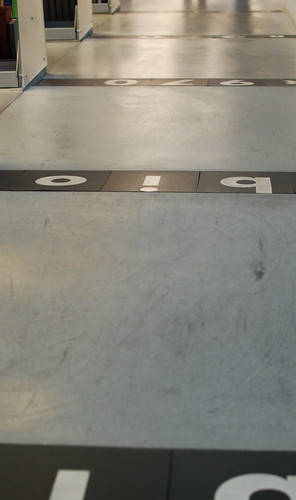 In a way, perhaps it is a Library for All. Like so many libraries, the needs of the Central Branch have changed over time. There was an area specifically devoted to people looking for work. Sectional chairs, each split into 4 seats, sprinkled throughout and equipped for reading or working on a laptop. A coffee shop. A pop-up store (which really made it feel more like a museum). The light (something libraries aren’t exactly known for) welcomed artists and people who seemed to want a place just to sit and think. 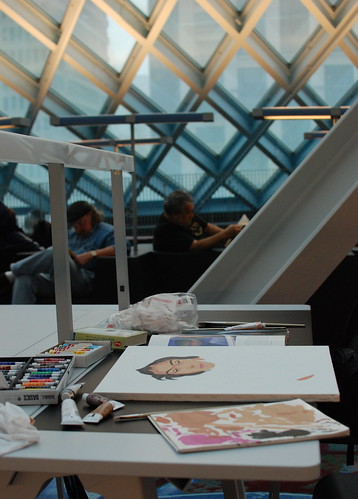 And books are still coming and going, as shown by the high tech circulation system and the video screen showing the titles being checked out and returned.

It was interesting, though – as much as Social Networking and the Modern Web (ok, so the capitalization is a bit facetious) are supposed to encourage communication and collaboration, my friends and I still felt like we needed to whisper. In looking for a space to sit and chat quietly, our options seemed to be the coffee shop (but we were plenty caffeinated at this point, and we could pay to sit in all manner of places) or on the ledge of a metal flower planter in the main atrium. We can shift what libraries mean, and look like, and the purpose they serve – but we can’t change the fact that libraries, modern and old fashioned, send us signals to speak in whispers.

(first image from Wikipedia, the rest are by me)