I Wish We Had IKEA

Although I’ve been to IKEA (or have sent a list with friends) more times this year than any other, my heart still quickens a bit when I see the yellow and blue sign on the horizon. I have an ongoing shopping list saved on IKEA.com – whether something catches my eye online or I realize we could use something at my house and I know that, if I can hold out, I can get the same thing at IKEA for half the price of anywhere else. It’s not perfect, it’s not necessarily heirloom quality, but I think there’s something to be said for design that almost anyone can afford. I’m a huge cheerleader.

Apparently Heather, the textile designer behind Skinny LaMinx, feels the same. Living in South Africa, they are truly outside the IKEAsphere. Someone sent her a catalog a few years ago and she sat down to sketch out her wishlist. While mine is an online list, or notes on the back of a receipt, hers consisted of cool drawings and a focus on the funny IKEA names. She turned the drawing into a tea towel, one I spotted over a year ago and immediately wanted, if only to share in our mutual IKEA longing (and be able to have a sense of humor about it). When I saw it again recently on Door Sixteen, I went straight to Etsy, saw there were only two orange ones left, and placed an order. It came a couple of weeks ago.

Some friends just recently took a trip to Seattle and Vancouver, B.C. and brought back a handful of IKEA goodies for me, including a few that are impossible to fly home (tabletop ironing board, for example). So my own list this time around was mostly focused on Christmas things, though the Americana red, white and blue holiday collection left me a bit cold. Here are a few of the things I picked up: 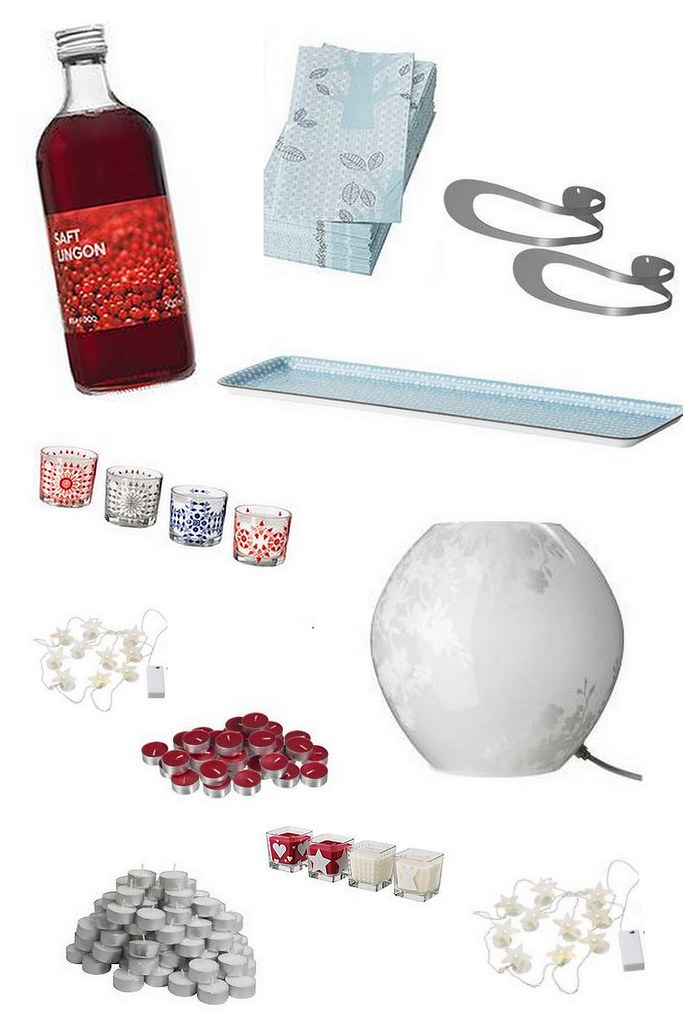 Things don’t always go exactly as planned – one of the main things I wanted was this red and white Barbar tray, but I only saw the black and white one with the deer. I should have picked up the white and blue floral instead – my (IKEA) coffee table is in need of a tray that’s slightly more wintery.

Once you start following along those arrows, you’re under pressure to get it while you pass it, or not get it at all. As Kate Paneros pointed out on her blog, the Gruen Transfer (“the moment when a consumer enters a shopping mall and, surrounded by an intentionally confusing layout, loses track of [his or her] original intentions”)  is completely explained within the context of IKEA – you may not walk out with exactly what you came for, but you will not leave empty handed.

One of my in-store decisions was the Henny Väv duvet cover, the blue/gray one with the cool white edge in this photo:

I’m trying to piece together a slightly warmer and considerably less hodge podge bed for wintertime, and this seemed like a step in the right direction….even if it was slightly pricier than I had originally planned.

All in all, a successful outing as always. I got to have meatballs and lingonberry fountain pop with a friend – and, surprise surprise, managed to mostly fill one of the huge blue bags.

Anything you’re craving at IKEA? Anything that always makes its way into your cart? Or are you surrounded by Poängs and a bit over the whole Scandinavian look?

(first two images from Skinny LaMinx, the rest from IKEA.com)

Posted in a few of my favorite things, blogs I read and like, design, new house, travel | Tagged Christmas, IKEA, Seattle, shopping | 2 Responses

2 responses to “I Wish We Had IKEA”