I’ve been feeling very Suzy Homemaker lately. I think it has to do with autumn, and days growing shorter, but I have been on sort of a roll with cooking and baking and crafting up a storm. And so one of the projects I finally got to is creating paper pom poms, which I decided to hang over my bed after seeing this photo:

I didn’t go quite as OTT as this photo, perhaps because I am not a baby and I don’t really even like pink:

But that is a pretty damn cute nursery, these things considered.

I’ve seen the pom pom kits at Michael’s, there were some hung at a store where I worked last year but I wasn’t working that day, and  so eventually I found the instructions on Martha’s website. (The kits don’t make a ton of sense since they are super easy and use cheap materials, but hey, we all need a quick out from time to time.)

Basically, you accordion fold sheets of tissue paper (I got mine at the dollar store and used about 12 per pouf), then wrap a small piece of wire around the middle and fluff the many layers. It’s surprisingly simple and the results are fun.

In pure Emily style, it couldn’t all go off without a hitch. I swear I can only learn these things by doing something entirely silly along the way. Once you make these pom pom things, you can’t really set them down without them getting all wonky and lopsided (and even so, one of mine looks like it has a cowlick). So I strung up all three above my bed on the night I made them…and attached the fishing line from the first one to the only place I could reach, the locking hinge thing on the window just above my bed. The one that faces the street. Which, duh!, meant I couldn’t put down the blinds. And it stayed that way for about two weeks a month, with me changing my clothes at night in the dark, and in the bathroom in the morning. Smooth move. Here’s a photo before I cleaned up the mess of wires and fishing line: 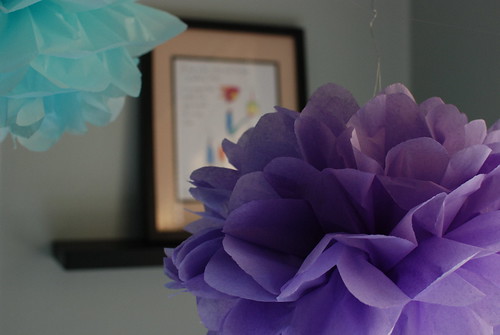 I’m still trying to figure out the spacing and height of them, with one pouf’s length of fishing line currently shortened by a binder clip, just to see how it looks before I go about actually clipping the line. As soon as I am happy with the arrangement, and perhaps with a new comforter cover to match….I’ll post a photo of the whole shebang. For now, I am happy to change my clothes in peace, with no creeper concerns.

These poufs are also going to be featured in the decorations for a baby shower I’m about to host. Even more crafting madness coming soon!!!!*

*couldn’t resist the multiple exclamation points with a phrase as nerdy as “crafting madness.” wow.

(photos from afewthingsfrommylife on Flickr and Covet Garden e-magazine)