In just a few short days, I’m hopping on a plane and heading to Seattle, home to grunge, Pike Place Market, the greatest Nordstrom Rack shoe department ever, an unbelievable number of coffee shops, and many of my old camp friends. I’m ashamed to admit how long it’s been since we’ve all reconnected (or rather, since I’ve connected with them, since so many have formed a little camp commune family in Seattle) and I can’t wait. Our plans include lots of walking around, eating, picture taking, a concert, a bit of shopping, and a ton of laughter and late night talks. 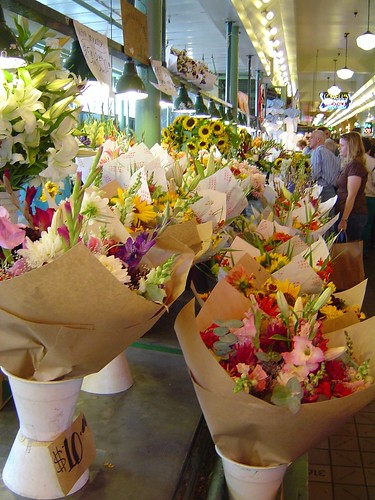 I’ve been to Seattle three times, and my last two Seattle trips have been fairly disastrous – one involved me throwing up in a frat bathroom, two days in bed or doubled over, one very long and snowy drive home, and a couple of nights in the hospital upon my return. (boo)  The next trip involved my car’s clutch going out as I was trying to enter the freeway on my way to pick someone up at the airport. After taking advantage of the hotel airport shuttle, feeling extremely appreciative of the kindness of the front desk woman and her handy boyfriend, sitting through an extremely long tow truck ride into the city, and doling out about $700, I had a new clutch. (double boo)

This time, Seattle will be kinder to me. I’m sure of it.

Since I don’t want to spend my time there sitting in front of the computer, I’m going to try to schedule some posts while I’m away. I’m still debating whether I want to bring along my computer to do a little blogging from the airport, so we’ll see. And then when I get back, I’ll post photos and thoughts and the results of my shopping trips (minus the Christmas presents for people who read this blog), all using the Seattle Sans font I downloaded (I am such a dork) after seeing it on Design*Sponge.