This is the story of one of my Adventures in Cooking. Actually, if we’re being nitpicky, it’s about an Adventure in Baking, but I’ll just call all of these kinds of posts A in C. Ideally, this won’t become a series. Ideally, my attempts at cooking and baking won’t always be so laughable.

You see, I really want to be a good cook. I’ve probably written about this before. In fact, I’m sure I have. I like cooking. I want to eat better. I was raised eating excellent meals cooked by my dad, whose favorite hobby is grocery shopping. He cooks something new every night and sometimes won’t repeat a meal for months. But I don’t really know what I’m doing in the kitchen, especially when it comes to following recipes, something he almost never does.

But in an attempt to teach myself to cook, I figured recipes were a good place to start. I get daily Martha Stewart recipes delivered to my email, which I try from time to time. I just bought a few new cookbooks – one at Ross and another couple at a church garage sale in Canada (I know, random). I have an entire binder of recipes I’ve clipped from magazines.

And so when my sister and I got on the topic of cobbler the other day, namely that we like it and haven’t had any for a very long time, I thought it would be a fun weeknight project. Besides, she, like my brother, took three semesters of cooking class in high school. They are constantly shaming me about my inability to measure accurately and about the fact that, until recently, I only had dry and not liquid measuring cups.

Well excuse me very much. I only kinda knew there was a difference, and figured it wasn’t much.

A few days ago, she emailed me a Rachael Ray recipe, but it seemed to require a food processor. Don’t have one of those. So she came over and we started checking out the Food Network’s website and their myriad cobbler recipes when she said, “OK, but it has to have things.”

“Things?” I asked, having no clue what she’s talking about.

“Yes, things!” she said, making her hands into a circle. After a bit of Google Images searching, it turns out “things” in her book are the biscuit-like toppings – she did not want to make a crumble or a crisp. It had to be a cobbler. With things.

That settled, we went for a blueberry and nectarine recipe and headed off to the store.

But not before calling our dad to ask whether we could buy tapioca in small quantities, since the recipe called for one tablespoon. I hate it when recipes call for minuscule quantities of things I don’t have and don’t want to buy an entire container of. I never know if they actually matter or not. He says tapioca will last and is good “until the day before you die” (apparently that last day, you hanker for tapioca), but after ascertaining that it was just supposed to make things sticky, we decided to use corn starch instead. Onward and upward.

At the grocery store, the world’s smallest container of blueberries was six dollars, so we decided to swap out raspberries instead. Another slight roadblock when we hit the dairy aisle and figured out we didn’t know the difference between whipping cream and heavy cream. We planned to make whipped cream, so could we just buy that and sub it in for the heavy cream in the dough recipe? Why was there nothing on the cooler shelf that said “Heavy Cream” – just one container that cost three times the others called “Table Cream?” Time to call Dad again. Good thing we did, as it turns out Table Cream won’t whip. And isn’t even heavy.

Here’s where things really started to go wrong. Due to the incredible inaccuracy of the produce scale, we ended up with two and a half pounds of nectarines rather than the required one pound. Armed with our whipping cream and raspberries, and out twelve dollars, it was time to head home.

The next couple steps were our fault, for sure. After I had cut up the nectarines and mixed them with the raspberries and an incredible quantity of sugar (and poured them into the pie pan – didn’t have a “9-inch round gratin or casserole dish,” or know what a gratin was…), my sister added the dotted butter. Then we realized we forgot to butter the pan. Oops. Butter pieces removed, then fruit. Pan washed. Buttered. Back in business.

Some of the in-between steps included driving across town to recover our baking powder from my boyfriend’s house, a two-person search for eggs in the cavernous fridge, and my sister’s responsibility of rubbing butter with her fingers into a bunch of flour and stuff to make a “shaggy, loose dough.” Yes, that was actually what it was called in the recipe. This should have been our early tip-off.

After the sticky, sugary filling bubbled over and coated the base of my stove (“It’ll scrape off,” my roommate said), it was time to pull the pan. Twenty minutes early. And thank goodness because the “cobbler tops” were starting to burn. 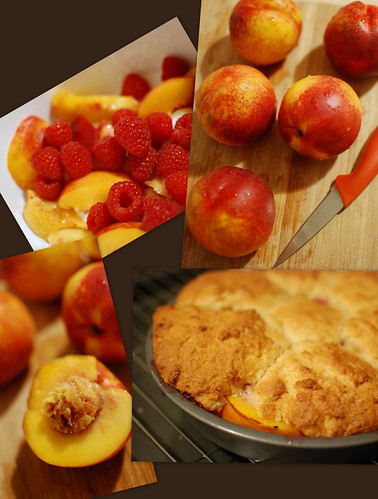 Four hours later, we had cobbler. With things. And it tasted ok, if you ignored the smell of burning sugar emanating from the kitchen.

2 responses to “Adventures in Cooking: Raspberry and Nectarine Cobbler”