I enjoyed watching the last episode of Spain…On the Road Again, even if it was different from what I expected. They did an excellent job of giving a sense of the majesty of the Alhambra, drove to Motril and Almuñécar in Granada province, two relatively unexplored parts of southern Spain, sampled tejeringos, a type of crunchy churro, and then drove through Córdoba and 5 kilometers outside the city to Medina Azahara (more on that amazing palace later). Not bad in an hour.

I read in two or three places that a few members of the crew ate in Córdoba at Sociedad de Plateros (it’s one of their top recommended restaurants), but the last episode, “A Sultan’s View of Andalucía,” featured only about ten minutes in Córdoba, and the only eating they did was toast with tomato and olive oil.  Of course, they ate it in my favorite plaza, Plaza de la Corredera, which has an amazing history dating back to Roman times–some of the mosaics uncovered here in the 1960s are on display at the Alcázar de los Reyes Cristianos–and is also sort of the center of Córdoba hippie culture. 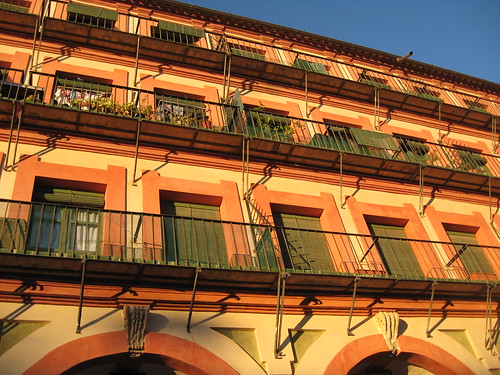 Here’s a short video of the plaza (with Spanish commentary):

It’s the perfect place to spend a Sunday afternoon…first a couple of beers with friends, then a long and mellow (but huge) communally-eaten lunch, then more café hopping for café con leche and whatever else comes your way. As annoying as it may sometimes be that everything is closed on Sundays, it also means the day is intended for relaxing, socializing, and lots of eating.

But, since the food of Córdoba didn’t get much coverage in the last episode, and the city can be sort of hard to navigate, foodwise, I thought I’d highlight a few of my favorite choices. Many tourists never leave the Judería neighborhood, which is unequivocally the historical center, but is sort of a food desert–either bad touristy places with overpriced, frozen paella and a menu in eight languages or haute cuisine only really available to the upper crust of the tourist masses. But Córdoba is not lacking in good places to eat, and none of these are more than a ten or fifteen minute walk outside the main tourist areas.

Click on the individual boxes to read the full reviews I wrote on tupalo.com.

And if you find yourself feeling a bit peckish during that long stretch between 2 pm lunch and 10 pm dinner, there’s always potato chips.

One response to “Córdoba: A food guide”